According to Butterflies and Moths of North America, there are 926 species of butterflies known to live on the continent. Jeff Trahan – with help from Rosemary Seidler, Terry Davis, and me – has found 97 of them in Caddo Parish.
So far.

Four of those species are commonly called “the dark swallowtails,” and those four species can be tricky to tell apart. They are the Pipevine Swallowtail, Black Swallowtail, Spicebush Swallowtail, and the dark morph female Eastern Tiger Swallowtail.

To distinguish between them, let’s look at them at the same time. 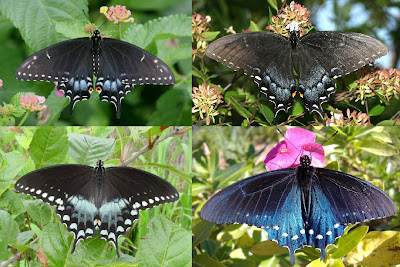 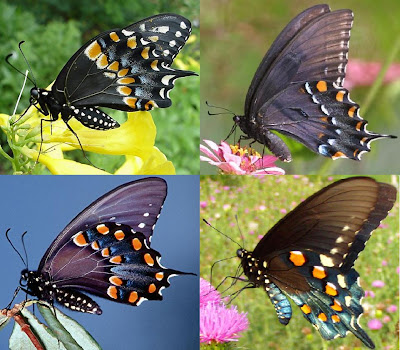 Okay, look at them again. This time, focus on the field marks, or things that define each species. 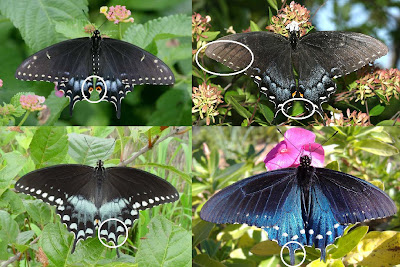 The top left is a Black Swallowtail. Males are unmistakable because instead of white spots, they have yellow spots, and they have an extra row of them. The female is pictured here. Male and female Black Swallowtails can always be identified by the black dot inside the orange dot. There are also some differences in the size and shape of the white spots on the forewing, and some other distinctions, but "pupil-in-the-iris" orange/black spot is a dead giveaway.

The top right is the female Eastern Tiger Swallowtail, dark morph. Notice the white spots on her forewings are really dashes. Also notice the white spots on her hindwings have a little orange in them, especially the ones on either end of the row. Sometimes you can still see a little yellow and maybe even a tiger stripe, but the dashes and the extra orange is always there. She's a bit bigger than the other dark swallowtails, too.

The bottom left is a Spicebush Swallowtail. There are some differences between males and females, but both sexes always have those fingertip-shaped spots on the hindwing that are bluish-white.

The bottom right is a Pipevine Swallowtail. There are subtle differences between male and female Pipevine Swallowtails as well, but both sexes have blue tails. Also, the blue color on Pipevines does not seem to be compartmentalized the way it is on other dark swallowtails, but rather blended looking. 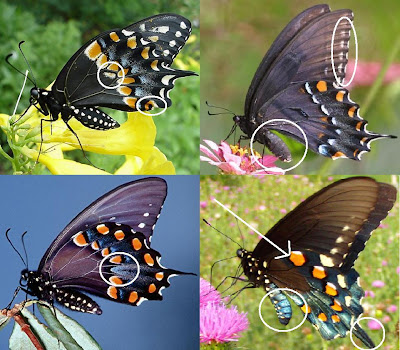 The pupil-in-the-iris is still visible when viewing the ventral side of the Black Swallowtail. There are pretty much two rows of orange spots, and the row closest to the body has a double spot.

To test out these identification short cuts, grab your binoculars and head out to the park for some butterfly watching. Swallowtails fly fast and high, so you may have to let some go uncounted.

But it's the thrill of the hunt, right?

Posted by Rachel Demascal at 3:24 PM

Thank you so much! It is so helpful to see all four side by side, and have the differences highlighted.

Do you have other pages?

There are dark shadows on the earth, but its lights are stronger in the contrast. See the link below for more info.

Every time I visit your blog it really completes my day, and hey its not a joke. I am telling the truth. Thank you for always inspiring us and for writing a very touching article.

I refer back to this information often. Thank you!

Thanks for this handy guide. Used it today to confirm identification for a spicebush swallowtail. Cheers!

Thanks so much for posting this! Super helpful!

Nice writeup! Could you add the Palamedes Swallowtail? It looks similar to the Black Swallowtail as well.

Thanks so much for this helpful post! I had what I initially thought was a Black Swallowtail in my yard a few weeks ago but now, comparing a photo I took to this info, I believe it was a Spicebush Swallowtail.

What a helpful article. Thank you so much! I have been struggling with dark swallowtail identification for some time, and your article cleared everything up!
~Sophie Buck

Thanks so much for this extraordinarily helpful article! The comparison photos and explanations are superb. After having my mind blown this week learning that we have more than one variety of dark swallowtail in our yard, I’m now confident that I can tell them apart thanks to your guide.

Rachel Demascal
After eleven years of exploring the forest and interpreting nature for park visitors, I obtained certification in the state of Louisiana to teach Middle School and High School Science, Middle School Social Studies, and High School Biology. Now, instead of seeing thousands of students for a few hours, I see a couple hundred of students for hundreds of hours. I have a B.A. in Interdisciplinary Studies from Centenary College of Louisiana and an M.S. in Resource Interpretation from Stephen F. Austin State University in Texas.